Our Djembe drumming program will consist of in person drum workshops in the Greater Toronto Area and Montreal that will be live-streamed for participants across Canada. This program does not require registration.

Don’t have a djembe at home? No problem! You can use a bucket, a table, or simply your knees.

A descendant of the Dafin people, Amadou was initiated as a djeli or griot (an oral historian), one of a long line of griots whose role is to preserve and transmit their people’s history, culture, and values. Nowadays, bringing the traditional to the contemporary, Amadou delights international audiences with his unique polyrhythmic expression of emotions and memories. 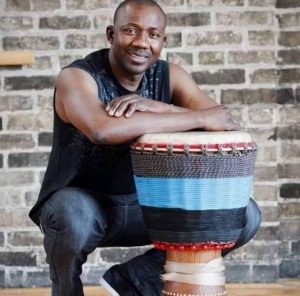 The djembe is Amadou’s principal instrument. As he describes it, “the djembe is more than a musical instrument; it is an extension of the musician through which he expresses his life, his emotions.” Mastery of the djembe requires a lifetime of discipline and dedication, and the guidance of a djembe master, provided, in Amadou’s case, primarily by his father, the late Revered Baba Kienou.